In Jamyang Khyentse Wangpo’s supplication to Chokgyur Lingpa, it says:

“The regent of the Lotus-born, Orgyen Chokgyur Lingpa…”

And in the Lifestory Supplication to Chokgyur Lingpa:

“The heart son of the Master of Orgyen, the second Buddha…” 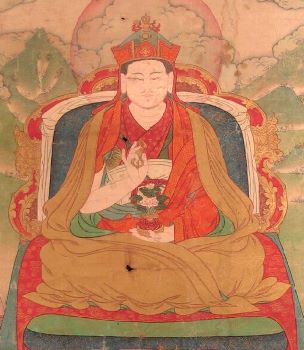 Although there are many treasure revealers, the one in whose dharma treasures the trio of the guru sadhana, the Great Perfection, and Avalokiteshvara are perfectly complete is thereby a Terchen, a ‘great’ treasure revealer.

In the Old School of the Early Translations, there are three lineages: the long lineage of Kama, the oral lineage; the short lineage of Terma or treasures; and the lineage of Pure Visions. From among those three, Chokgyur Lingpa’s treasure teachings belong to the short lineage of Terma. Moreover, he is the last of all the one hundred and eight great treasure revealers, the great being who embodies all their activities, the supreme treasure revealer Chokgyur Lingpa. All of his treasure teachings are in harmony with the long lineage of Kama. They have great blessings. The four Guru’s Heart Practices, the Seven Profound Cycles, the Seven Cycles of the Heart Essence and so forth are profound and vast, easy to practice, and up until now the lineage of samaya is undamaged by obstacles and broken samaya. It is an excellent lineage, unbroken, and supreme. Therefore, he is called Ground Chokgyur Lingpa, or Zhi Chokgyur Lingpa.

By practicing the treasure teachings himself, he had a pure vision of the deities and guru. He obtained the prophecy and siddhis or ‘accomplishments’. Concepts of this present appearance naturally collapsed and in the primordial thought-free luminosity all phenomena were realized as one taste in the vast expanse of great bliss. Therefore, he has the name Path Great Bliss, or Lam Dechen Lingpa.

Due to the supreme ground (zhi chokgyur) and the path of great bliss (lam dechen), all concepts of impure dualistic fixation, without being abandoned, naturally purified and the fruition—the ground, path, and fruition indivisible and of one taste—was actualized. Hence, he is called Fruition Zhigpo Lingpa, or Dreybu Zhigpo Lingpa.

Whoever makes a connection with these treasure teachings by receiving empowerments, teachings, doing these practices and so forth, will be reborn in Chokgyur Lingpa’s pure land, Pedma Kebey Zhing, the Lotus Pure Land. That is another unique quality of this lineage: not only is it endowed with these seven transmissions, unbroken samaya and so on, but whoever is connected to these teachings will, without doubt, be reborn in Chokgyur Lingpa’s Lotus Pure Land.