Dear friends,
Today we launched our new Lhasey Lotsawa website where you can find details of our translations and publications projects. In particular many of our practice texts are available there for free download. Heartfelt thanks go to all the fellow students and friends who have offered their sponsorship and support to make this all possible. Click here to visit the new site.
Warmest wishes,
The Lhasey Lotsawa team 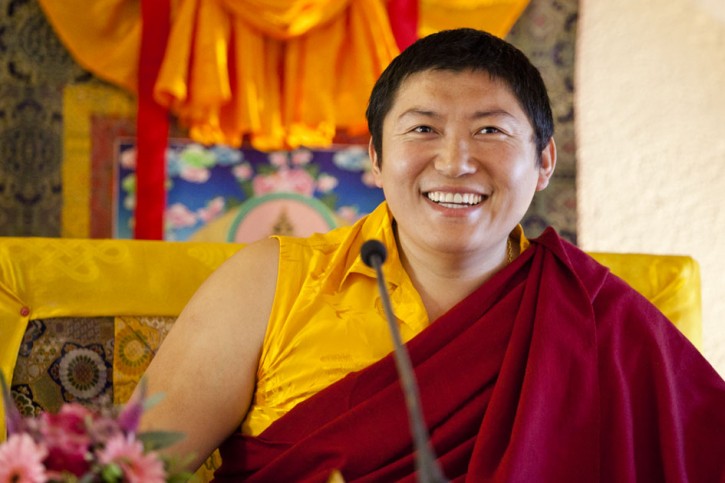 Phakchok Rinpoche will be traveling and teaching in Asia through the end of this year. His teaching schedule can be found here and will be updated as additional teachings are announced.

May all be auspicious! Sarva Mangalam

This year Kyabje Tsikey Chokling Rinpoche spent nearly two months in Malaysia and Singapore sharing the dharma with many people. The tour started at Ka-Nying Ling, the oldest of our dharma centers in S.E. Asia, with several empowerments. Though Rinpoche had to suddenly travel back to Nepal to preside over the cremation ceremony of our monastery’s beloved treasurer, Namdrol Gyatso, who stayed in post death meditative samadhi for numerous days after his passing, the lamas travelling with Rinpoche stayed back and performed numerous pujas for the occasion.

When Chokling Rinpoche returned to Malaysia several days later, he led the planting of naga vases in the ocean in Klang, near Kuala Lumpur. In Kyabgön Phakchok Rinpoche’s newly established Rangjung Yeshe dharma center in Selangor, Chokling Rinpoche gave the empowerment for Tukdrup Sampha Lhundrup. This was very well attended and the new center was filled to the brim. Rinpoche then gave wonderful heart advice based on the Four Dharmas of Gampopa and Longchenpa at our Rangjung Yeshe center in Ipoh, Perak.

The sangha in Singapore led by resident lama Tulku Migmar have been working hard to open their new dharma center. Chokling Rinpoche along with lamas inaugurated the new Rangjung Yeshe Oddiyana dharma center and the inauguration ceremony was attended by sangha from Singapore, Malaysia, Thailand and Indonesia as well as from numerous Buddhist foundations in the area. Rinpoche’s visit to Singapore was concluded with a three day retreat on the Concise Manual For Daily Practice. This is the most concise Guru Rinpoche sadhana in our New Treasures lineage and the retreat was very well attended.

The highlight of Chokling Rinpoche’s two month dharma tour was the International Vajrasattva retreat held at the Ipoh Cave Temple. The location of the retreat was special because it is the place where our great refuge and protector, Kyabje Tulku Urgyen Rinpoche did three months of retreat, built a stupa, taught the dharma and gave empowerments for the first time in Malaysia thus planting the seeds of our lineage there. During the retreat Rinpoche gave a detailed commentary on the Vajrasattva of The Secret Essence practice and everyone practised four group sessions each day.

The next stop was in Cameron Highlands where Rinpoche conducted a Kurukulle fire puja. Rinpoche then travelled to the dharma center Rangjung Yeshe Kedah for the first time. He performed two days of puja there with the local sangha and was very happy to meet the students there.

The final stop on Rinpoche’s tour was Penang where he held a program in their new Rangjung Yeshe dharma center. Rinpoche auspiciously gave the center a copy of the forty volumes of the Chokling New Treasures texts. Rinpoche then taught on the four mind changings and the need to gradually gain stability in meditation through cultivating one’s practice on the path.

All in all it was a very successful dharma tour and everywhere Chokling Rinpoche went became filled with blessings and the auspiciousness of the dharma. It is taught that the dharma is the only medicine that can cure the sufferings of samsara and to have a master such as our Kyabje Tsikey Chokling Rinpoche guiding us on the path is an incredible good fortune. May this great fortune continue further and further without obstacle! 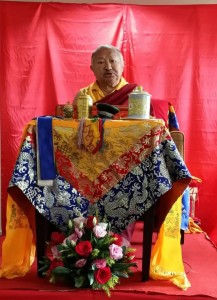 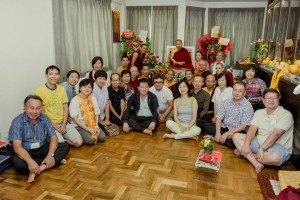 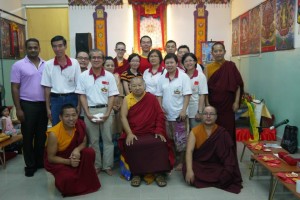 Rinpoche with members of the center in Kulim 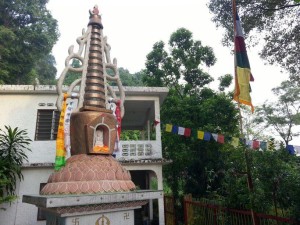 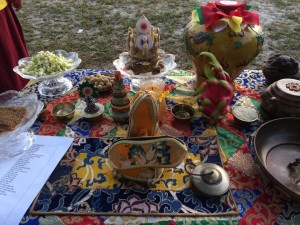 “I was deeply saddened to learn that H H Kunzig Shamar Rinpoche, one of the principal upholders of the Karma Kagyu Lineage, had suddenly and unexpectedly dissolved into dharmadhatu. We… 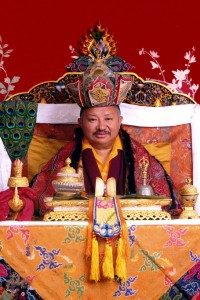 Schedule with full details is currently being prepared and will be available as a PDF. Please come back soon. 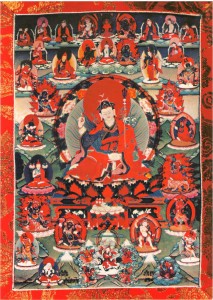 Guru Rinpoche from the terma treasure of Terchen Chokgyur Lingpa.

The Ngagso practice is well known to the sangha of Tulku Urgyen Rinpoche as it was established at Ka-Nying Shedrup Ling monastery by both Tulku Urgyen Rinpoche and Lama Putsi Pema Tashi. The Ngagso practice is entitled ‘Ocean of Amrita’ and combines the mandalas of the One Hundred Peaceful and Wrathful Deities together with the Guru Rinpoche cycle of Lamey Tukdrup Barchey Kunsel. The particular aim of this extensive vajrayana ritual practice is to purify our damaged and broken vows and samayas of the three vehicles and to then restore them, with an emphasis on restoring the vajrayana samayas and retaking the path empowerments. 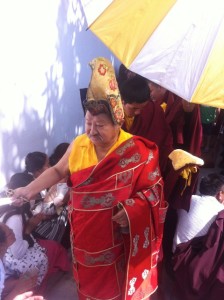 Kyabje Tsikey Chokling Rinpoche on the final day of the drupchen.

Every year the nine day drupchen is led by our Rinpoches together with lamas, monks and lay practitioners. This year Kyabje Tsikey Chokling Rinpoche very kindly bestowed the rarely given empowerment for this practice just one week before beginning the drupchen. The Ngagso is a terma treasure revealed and further elaborated upon by Terchen Chokgyur Lingpa.

The White Amitayus Drupchen is an extensive group practice from the Chokling New Treasures lineage. It is practiced every year at Ka-Nying Shedrup Ling Monastery in Nepal, having been established there by Tulku Urgyen Rinpoche. Through the means of practicing this drupchen the practitioners intend to realize wisdom wakefulness (yeshe) by revitalizing life (tse so), revitalizing merit (sonam so) and developing a magnetizing presence (wangtang so). These are all things we need to be complete on the path to gain realization and to go through this practice together with our Rinpoche’s is a great blessing. 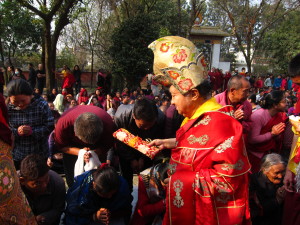 Tsikey Chokling Rinpoche blessing those in the courtyard on the last day of the drupchen. 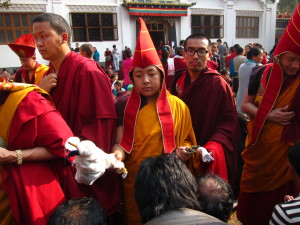 Tulku Urgyen Yangsi during the final day of the drupchen. 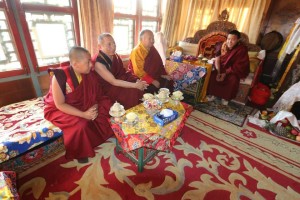 Every year to usher in the Tibetan New Year at Ka-Nying Shedrup Ling monastery our Rinpoches, lamas, monks and lay practitioners practice Vajrakilaya for five days. On the last day of the practice take place the lama dances and Gutor ceremony. The practice used is the Vajrakilaya of the Seven-Fold Profundity, which is the extensive phurba practice revealed by Terchen Chokgyur Lingpa. The objective is to remove the negativity created through our judgmental emotional mind and ego clinging from the past year in general. The dances and torma ritual were guided and carried out by Tsikey Chokling Rinpoche.

On the morning after the year end wrathful practices were finished, again our Rinpoches, lamas, monks and practitioners gathered in the monastery’s lhakang to practice an extensive Smoke Cleansing Offering(sang cho). 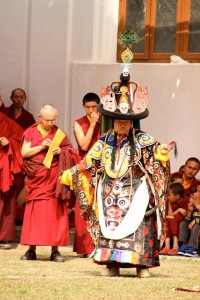 The next day was the first day of the Tibetan New Year and our Rinpoches were able to spend time together during a family visit to Dilgo Khyentse Rinpoche Yangsi. The New Year’s day was a wonderful time and all are looking forward to the year ahead. 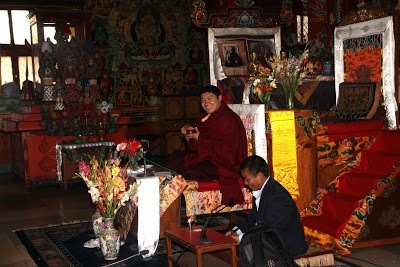 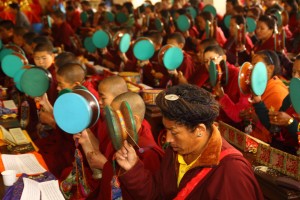 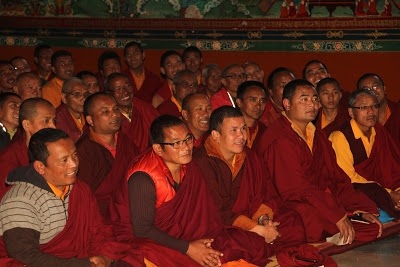